Wow what a week!

Miramichi and Richard Kingscote kicked it off with a run at Windsor on Monday night for Caroline Ingram. Wasn’t his night and we move on to the next run.

Tuesday, we were at Newbury for the first day of school for two 2-y-olds; Queen Of Uplands a filly and Profitar Rules a colt.

Queen Of Uplands ran a really promising race to be 5th of 17 runners, and confirm the impression that she can be an exciting juvenile sprinter for this flat season. It was fabulous to see so many syndicate members at Newbury. Having previous yard owners return and get involved is heart warming. Thank you to everyone. 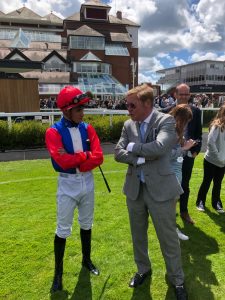 We also now have another set of the red and white colours for race day, as we had to have some made as the other set were still in storage, but this might be the inspiration we need to get another horse to give more people the opportunity to get involved, so watch this space!

Profitar Rules ran in the second division of the Maiden and was ridden by Pierre-Louis Jamin. He ran an encouraging race for new owner David Foy and will learn a lot from his racecourse experience. 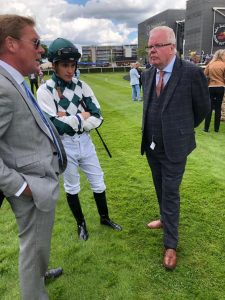 On Friday, 3rd June, Nine Dragons had his 2nd run, this time over the straight mile at Doncaster for owners Rockcliffe Stud and ridden by Alistair Rawlinson. This time the son of No Nay Never (USA) was smartly away and led the field only weakening late on, showing plenty of promise.

We didn’t have any more runners, but on Saturday, 4th June, Richard Kingscote won the Derby! Amazingly it was only his second ride in the World’s most important flat race, but he rode like a old-hand, which he is, to win on the Sir Michael Stoute trained colt, Desert Crown.

Tom was asked to comment by the Sporting Life and the article can be found here.

This attractive Magna Grecia x Thai Haku colt is for sale! The mare was a listed winner and Magna Grecia’s progeny were highly sort after at the yearling sales, selling for up to 300k. For more info visit https://tomdascomberacing.com/magna-grecia-ire-x-thai-haku-ire/
Or get in touch with tom@tomdascomberacing.com https://twitter.com/i/web/status/1620451597712232449

There aren’t many shares left in this Calyx x Lovelocks colt (near side) so don’t miss out on the fun! For more information email info@millennialracing.com

Really excited to see this Dandy Man colt on the racecourse for @roudeeracing! He is progressing very nicely and is showing a great attitude. They are a great syndicate to get involved with!

Our new Dandy Man colt in training with @TomDascombe is looking fab . He is very strong and is loving his work. He should be an early type. Certainly in time for Chester May festival. Limited shares available. Please DM or contact via our website

This website uses cookies to improve your experience while you navigate through the website. Out of these, the cookies that are categorized as necessary are stored on your browser as they are essential for the working of basic functionalities of the website. We also use third-party cookies that help us analyze and understand how you use this website. These cookies will be stored in your browser only with your consent. You also have the option to opt-out of these cookies. But opting out of some of these cookies may affect your browsing experience.
Necessary Always Enabled
Necessary cookies are absolutely essential for the website to function properly. These cookies ensure basic functionalities and security features of the website, anonymously.
Functional
Functional cookies help to perform certain functionalities like sharing the content of the website on social media platforms, collect feedbacks, and other third-party features.
Performance
Performance cookies are used to understand and analyze the key performance indexes of the website which helps in delivering a better user experience for the visitors.
Analytics
Analytical cookies are used to understand how visitors interact with the website. These cookies help provide information on metrics the number of visitors, bounce rate, traffic source, etc.
Advertisement
Advertisement cookies are used to provide visitors with relevant ads and marketing campaigns. These cookies track visitors across websites and collect information to provide customized ads.
Others
Other uncategorized cookies are those that are being analyzed and have not been classified into a category as yet.
SAVE & ACCEPT